The community in Brgy. Balengaeng were composed of farmers. Majority of their produce were wash-off during the recent flash flood in Davao City last August 28,2019.

“Since we’ve heard that there are flood victims, especially in District 3, that were not able to receive any donations from the government or private institutions, the whole institution of PWC decided in extending help to the certain farm community in Los Amigo,” Mr. Naval said.

Interestingly, Mr. Naval also said that the main reason why they help the farm community is to show appreciation to the farmers in Brgy. Balengaeng. 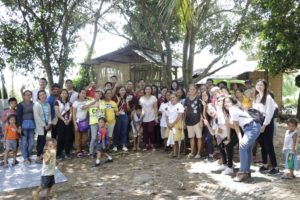 By giving respect to the farmers, the faculties and representatives from the student councils of the junior, senior high, and tertiary level of PWC participated in distributing donations.

Moreover, the students were also able to engage with the farmers. They have witnessed the livelihood of the barangay. They have also conversed on what the farmers experienced during the flash flood.

Kagawad  Catherine Meg Remonde expressed her gratitude to the generosity of PWC despite that their place is far.

The residents of the barangay were also grateful that for the first time since the flood, they were able to receive help.

Mr. Naval also apologized to the delay of their donations and gave thanks that they were able to help the community.

Prior to this event, the PWC community also distributed goods to their students and faculties who were also victims during the flash flood in the areas of Talomo.